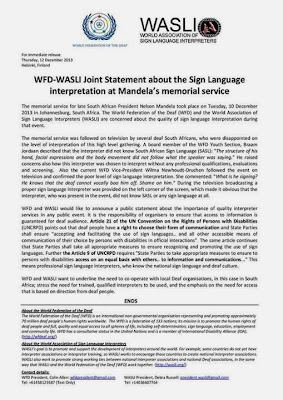 WFD-WASLI Joint Statement about the Sign Language interpretation at Mandela’s memorial serviceThe memorial service for late South African President Nelson Mandela took place on Tuesday, 10 December 2013 in Johannesburg, South Africa. The World Federation of the Deaf (WFD) and the World Association of Sign Language Interpreters (WASLI) are concerned about the quality of sign language interpretation during that event.

The memorial service was followed on television by several deaf South Africans, who were disappointed on the level of interpretation of this high level gathering. A board member of the WFD Youth Section, Braam Jordaan described that the interpreter did not know South African Sign Language (SASL): "The structure of his hand, facial expressions and the body movement did not follow what the speaker was saying." He raised concerns also how this interpreter was chosen to interpret without any professional qualifications, evaluations and screening. Also the current WFD Vice-President Wilma Newhoudt-Druchen followed the event on television and confirmed the poor level of sign language interpretation. She commented: "What is he signing? He knows that the deaf cannot vocally boo him off. Shame on him." During the television broadcasting a proper sign language interpreter was provided on the left corner of the screen, which made it obvious that the interpreter, who was present in the event, did not know SASL or any sign language at all.

WFD and WASLI would like to announce a public statement about the importance of quality interpreter services in any public event. It is the responsibility of organisers to ensure that access to information is guaranteed for deaf audience. Article 21 of the UN Convention on the Rights of Persons with Disabilities (UNCRPD) points out that deaf people have a right to choose their form of communication and State Parties shall ensure “accepting and facilitating the use of sign languages.. and all other accessible means of communication of their choice by persons with disabilities in official interactions”. The same article continues that State Parties shall take all appropriate measures to ensure recognizing and promoting the use of sign languages. Further the Article 9 of UNCRPD requires "State Parties to take appropriate measures to ensure to persons with disabilities access on an equal basis with others.. to information and communications..." This means professional sign language interpreters, who know the national sign language and deaf culture.

WFD and WASLI want to underline the need to co-operate with local Deaf organisations, in this case in South Africa; stress the need for trained, qualified interpreters to be used, and the emphasis on the need for access that is based on direction from deaf people.